“There is a palpable fear to living in a new country, and though it is more acute in the first months, even year, of your stay, it never completely evaporates as time goes on. It simply changes. The anxiousness that was once concentrated on how you’re going to make new friends, adjust, and master the nuances of the language has become the repeated question “What am I missing?” “-Chelsea Fagan.

There were things I was supposed to do while I was back in the States. Get my hair cut. Check the status of my student loans. Buy more Starbucks Via. Get my Kindle fixed.

In the past two weeks, I did none of those things.

Instead, I walked on the beach. I drank good beer. I went on a winding road trip up the precarious roads of Highway 101. I camped in the Redwoods. I surprised a friend at a going away party. I held my niece, I hugged my friends, and I smiled so much my face hurt.

I landed in San Diego filled with anxiety and anticipation. Although the prospect of going back to the Sates was exciting, it was also nerve racking. It had taken a few months for Otavalo to feel like home, was I ruining that by leaving so quickly? Aurora had fretted about me leaving, especially as the dates of my return kept changing.

“You’re not going to come back,” she kept saying. “You’re going to love it so much you won’t come back.” I had assured her that no, I was definitely coming back. “I’m leaving most of my stuff here!” I insisted. She didn’t seem convinced.

San Diego is a beautiful destination. I didn’t even stay in San Diego, but rather, Cardiff-by-the-Sea, a suburb that hugs the Pacific Ocean and seems almost suspiciously beautiful. How can the water be so clear? The sky so blue? The streets so clean? How is everyone so fit? I had woken up one morning in my tiny, cement room on the side of a mountain in Ecuador, and the next night fallen asleep in a beach house a few blocks from the Ocean. My mind was spinning.

I had a realization when I was younger, maybe 12 or 13, that no matter where I was I would always be missing someone. My family is spread across the globe, some in England, Australia, Canada. There are not many of us in Oregon. And I remember, standing in the kitchen of my Aunt and Uncle’s house in England, so happy to be there, but also missing my mom, who had stayed behind in Oregon. And it hit me. There will always be someone. There will always be something. A part of your heart may always wish it was somewhere else.

I spent a few days in San Diego with Jeff, and then we packed up his old Sentra and headed north. He is moving back to Portland and we decided a roadtrip would be the most fun way to get both ourselves and his stuff up to Oregon. We had roadtripped down to San Diego the previous year, but through the awful corridor of I-5, so this time we took the scenic route. The coastline of California is beautiful, and often we were silent, as I stared out the window and wondered what my host family was doing.

It is strange, to be in a place you have imagined for so long, thinking of the place where you imagined it.

I spent four days in Portland. The things I loved the most about my time at home was the simple moments that I had missed while in Ecuador. Sitting in a bar drinking IPA, huddled close to a newly built campfire as the sun goes down, sitting with my parents on our deck, watching our fat old dogs waddle around like balloon animals, reading a book with my niece, sitting in a car with Tia and Jamie, singing Avett Brother’s lyrics late at night on the couch with Skip. To sound very cliché, it felt like a gift to spend time with people I care about so much.

After Portland, Jeff and I flew back to San Diego, where I spent two days before I flew back to Ecuador. As I went about my days in the States, I thought constantly about Ecuador. About my family. About my work. About going back. It seems, Otavalo has really gotten under my skin.

But, leaving was difficult. Saying goodbye to family and friends, knowing how long it will be until you see them again. Knowing exactly what it feels like to miss them. Knowing you will feel that again. It is difficult, when I feel as if I fit into my life in Portland like a puzzle piece, to realize I am going back to a place that sometimes is very difficult.

But I arrived yesterday in Panecillo, my bags heavy with presents for my host family. I started walking down the steep dirt hill that leads to the house, but couldn’t see a single family member outside. Then Johnny, my twelve-year-old brother, walked out the door, his head down, reading a book.

“Hola!” I said from where I stood. He looked up, and his faced exploded into a smile.

“LIZZIE!”He screamed, dropping his book. He ran towards me, throwing his arms around me. “LIZZIE, LIZZIE, LIZZIE!!” Mateo stumbled out the front door, followed by Nataly, followed by Aurora. Mateo jumped up and down and then wrapped his little arms around my legs. I hugged each of them and when I got to Aurora she said: ” I really thought you weren’t coming back.” 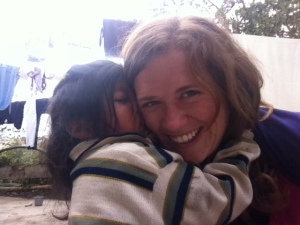 It seems, that maybe I fit into two places.