“Mountains are not Stadiums where I satisfy my ambition to achieve, they are the cathedrals where I practice my religion.”
― Anatoli Boukreev

We stand on Larkya Pass. The wind is whipping us in the face, and we huddle together for our group photo.

After eight days, the climbing is over. We have hiked from 500 feet of elevation to 17,000 feet. From shorts and chacos to down jackets and base layers. We are at the highest point in our journey, and finally-finally- it is time to descend.

But I am having a few issues.  Actually two issues, one on my left foot and one on my right. 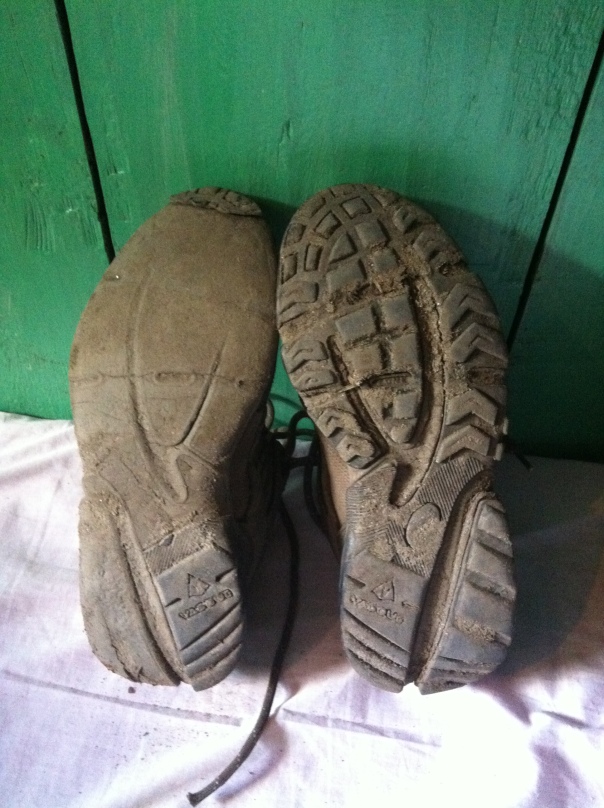 My boots areshot. They had been falling apart since day two. I’ve had this particular pair of boots since I was 18, and regrettably didn’t really check what kind of shape they were in before the trip. Yes, that is a huge oversight. Yes, that is incredibly stupid. Yes, my travel partners were incredulous and could only shake their heads when I showed them how the tread was peeling off of my boots like the skin from an orange. I bought some super glue and was able to do a bit of handiwork on the right boot, but the left boot was completely exposed.

Luckily, this wasn’t much of an issue before base camp. Sure my boots lacked tread, but the trail was dirt and rocks. There was nothing to slip on.

But this changed once we hit snow. There were feet of on the ground, and the freezing temperatures the night before had left a frozen sheen over every inch of the trail.

The walk to the pass had been slippery, but using my trekking poles and a pair of Skip’s socks (this was the Kiwi’s idea- apparently in New Zealand when it freezes over it’s perfectly normal to see people walking down the street with socks over their shoes for the extra grip) I made it to the path unscathed.

“No more up!” I yell happily at Autar, who stands a few feet away from me, trying to hustle us down the mountain.

“Yes, bye-nee” He says. He has called me little sister since the first day of the trek. He starts ambling off down the mountain, and so I throw on my pack and follow.

I am walking slow. Placing each foot delicately on the hardened snow before stabilizing my weight with a trekking pole and then putting weight on my foot. Still, I slide. As the angle of the trail gets steeper, each of my steps become less successful. I fall forward onto my hands. I fall backwards onto my pack. I slip sideways and get caught waist deep in a snow drift.

This is funny at first.  I’m a fairly -alright very – clumsy adult and I spend a good deal of time laughing at my lack of grace. But after fifteen minutes it isn’t funny. It’s scary. I can barely stay standing.  The path loses elevation quickly, leaving a virtual ice slide from where I am standing to the rocks below.  Each time I fall I slide down the path, my heart pounds in my throat until I’m able to dig in and stop myself.Jeff is having similar issues. The bottom of his boots have frozen solid, and he can’t get a grip on any surface.

I don’t know how we’re going to get down this mountain.

Autar always kept a close eye on me. And in this moment, it is no different. He stands, fifty feet down the path, yelling encouragement.

“I am fine!” I yell back, before  taking a step and tumbling down the path ten feet.

He climbs back up the trail to where I am picking myself up. The mountains loom large around us, and all I can see is white. Snow, ice. Snow, ice.

“Okay Bye-knee.” He stands in front of me, taking one of my hands and one of my trekking poles. As I stand behind him, he takes a step and indicates I step where he just was. I slip, and he holds strong, stopping my fall.

We hike like this for two hours. Down, down, down. My legs and back begin to cramp, but Autar keeps me standing. At one point I fall so hard I take us both out, sending the two of us sliding dangerously down the trail until Autar grabs a rock. It’s a really heroic effort. I am much taller than Autar, carrying a 35lb backpack and cannot move without his assistance.

Finally we hit trail where the snow has melted and I sit down, exhausted. The other members of our group have waited, and Jeff is right behind me.

“You okay, bye-knee?” Autar asks, as I sit hunched on the rock, tearing into a cliff bar.

“Oh you always fine!” He says, grinning and chuckling.

The hiking is much easier the rest of the day. The path continues winding down, but there is no ice. I am back to hiking without assistance,  muttering, “I hate the snow.” to anyone near me.

We end the day in Bimthang, where we sit around a wood stove, drink tea and enjoy a few much needed beers.

Later, Jeff would tell me that he thanked Autar for taking care of me as we descended the matter.

“This is my job.” He said. Grinning, like always.